In one of the MIT Artificial Intelligence¹ classes, we briefly discussed what intelligence meant to different people.

My simplistic way to look at intelligence was:

Intelligence is how we retain what we comprehend and perceive as knowledge, and how we intuitively adapt and apply this knowledge to the various day-to-day tasks in the environment’s context.

Of course, the word intelligence is way too ambiguous and unspecific of a term to be used without a qualifier. I am talking about Human Intelligence.

We weren’t trying to define intelligence, knowing that even Alan Turing, had trouble doing so, and he ended up creating the Turing Test to test if a machine-intelligence can match human-intelligence.

Professor Winston (MIT CSAIL) in the class said that his Ph.D. advisor Marvin Lee Minsky did not bother defining intelligence either and said, intelligence is a ‘suitcase’ word, and you can stuff many words into it.

So when you think of human intelligence what words come to your mind?
Sentience? Intuitiveness? Coherence? Reasoning?

There are many more words. Some are duplicates of each other, but this is what I came up with.

On further thought, I added more words. I think a modern suitcase would also include sense, emotionality, reasoning, responsiveness, and conscientiousness.

It is interesting to compare Human and Machine Intelligence keeping above words in mind.

Then again Conscientiousness is another suitcase term. You can stuff other words in it. So are words like self-awareness, creativity, and emotion.

In an earlier section, I defined Intelligence as:

Human Intelligence is how we retain what we comprehend and perceive as knowledge, and how we intuitively adapt and apply this knowledge to the various day-to-day tasks in the full context of the environment.

Conscientiousness itself is another suitcase term. You can stuff other words in it. So are words like self-awareness, creativity, and emotion.

To remove ambiguity and to differentiate we tend to use a qualifying prefix for such suitcase terms.  Consider the following sets of examples:

There are many theories that classify Human Intelligence.  The three popular ones are by psychologists Raymond Cattell, Robert Sternberg, and Howard Gardner who categorized Human Intelligence based on tasks, cognition, and modality respectively.

Robert Sternberg provided a cognition-based description of intellectual capability “Theory of Successful Human Intelligence.”  He associated the workings of the mind with three components. Meta-components tell the mind how to act, i.e., to solve problems and make decisions. Performance components do tasks assigned by meta-components. Knowledge-acquisition components are used in obtaining and selectively combining new information.

Howard Gardner has described numerous and distinctive types of intelligence in his books and updated in his videos.

In “Theory of multiple intelligences,” he describes the following forms of Human Intelligence based on modality:

Emotional Intelligence (EI) is the capacity of individuals to identify and manage emotions both their own and those of others. EI includes the ability to,

Emotional Quotient (EQ) is how the development of Emotional Intelligence (EI) can be measured. 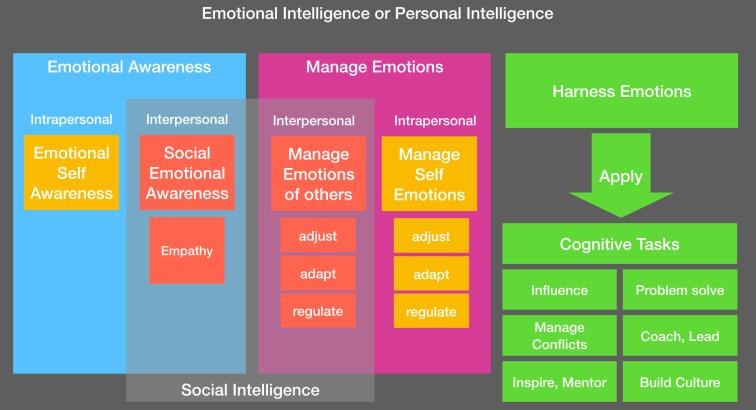 Plants exhibit intelligence in numerous ways.  Mimosa collapses its leaves temporarily when it is disturbed by dropping. However, upon continuous dropping, the plant learns to ignore the stimuli but continues to react to other disruptions.   Plants secrete defensive chemicals when they hear an audio recording of caterpillars munching on leaves. See New Yorker article.

Like Humans, dolphins can recognize themselves in a mirror. Monkeys can use tools like a stone to crack open nuts.  Birds, chimps, whales, bears, and octopi can plan for the future. Source: 1 and 2.  Some animals also have enhanced perception compared to humans.  For example, dogs, mice, and rats have an advanced sense of smell.  Dogs can hear high frequencies of up to 64,000 Hertz compared to under 20,000 Hertz for humans.

Animals have perception and rats have demonstrated sequencing.  Only humans have the unique capability of merging different concepts to form new concepts, allowing us to build elaborate, highly nested symbolic descriptions of situations and events enabling storytelling and generation.

We tend to use the term Intelligence quite widely.