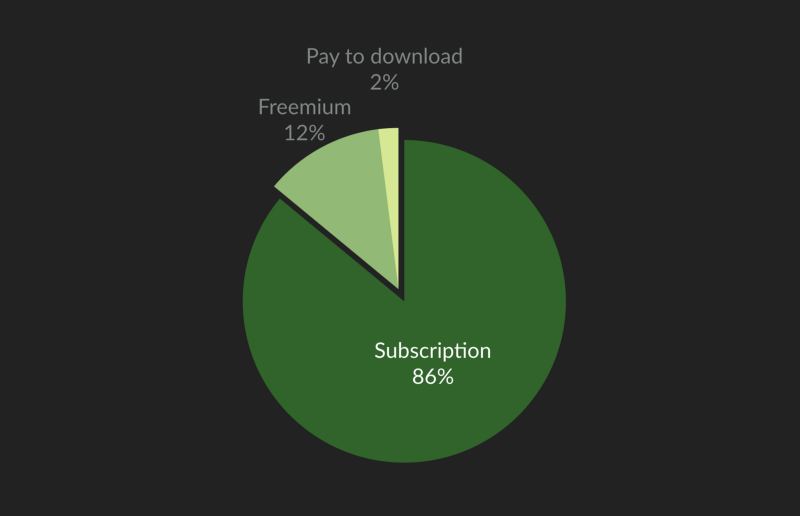 Subscriptions pay model is growing faster than both pay-to-download (or premium apps), and freemium (apps with non-subscription in-app purchases). App publishers should consider using auto-renewable subscriptions where applicable in their monetization strategies.

Activate Inc. published research on Oct 26 in the Wall Street Journal and looked at top 100 non-gaming media and entertainment apps from 2011 to 2016, on consumer pay models in mobile apps.

Side note: games are the most popular category on the Apple and Google Play app stores, and 25% of the 4.2 million apps on the app stores are games.
This research focused on media and enterprise apps and excluded gaming apps.

Only pay-to-download, freemium and subscription consumer pay models were considered in the research.

Apps that do not monetize or monetize outside the app store (using advertising, sponsorships, self-promotions and affiliations) were not included. I blogged about Mobile ad blocking and various app monetization options available here.

On the app stores, this means the paid or premium apps. I have blogged about how hard it is for app publishers to charge for their apps in 99 penny gap & premium apps.

Free-to-download apps with an In-app purchase subscription.
The subscription may be non-renewable, or auto-renewable with durations: weekly, monthly, bimonthly (once every two months), quarterly, half-yearly, or yearly.

The chart below shows top 10 apps across all categories except gaming subscription revenues by an app in the US in last 12 months from September 2016. Top subscription services in app stores are mainly video and music streaming.

Subscriptions in all app categories

Auto-renewing Subscriptions have been made available for app categories, not just games, media and entertainment, since mid-2016.

Apple and Google have incentivizing app publishers with better pricing for subscriptions with 85:15 split for app publishers (after the first year in the case of Apple), since mid-2016.

Not to confuse with “Freemium” and “Subscription” pay models in this research, Auto-renewal subscriptions on the Apple app store support the freemium model, i.e. free trials with a length dependent on the duration of the subscription.

Subscriptions pay model is growing faster than both pay-to-download (or premium apps), and freemium (apps with non-subscription in-app purchases). App publishers should consider using auto-renewable subscriptions where applicable in their monetization strategies.